As far as I can discern JGF is a fine writer. Interesting to compare with Elizabeth Bowen. The English have a huge lapse of memory with respect to Ireland.

Reviews From the Archive 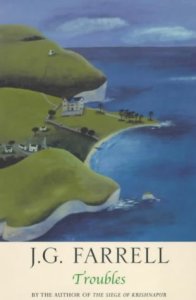 Troubles, by J G Farrell, was the retrospective winner of the Lost Booker Prize in 1970.

Troubles is the predecessor to The Siege of Krishnapur which won the Booker, and this one won the Faber Memorial Prize in 1970 (and posthumously, the Lost Booker Prize, one which has zero credibility with me because it was determined by popular vote).

Troubles is not as good as The Siege of Krishnapur, but it’s very good in parts. It’s set in Ireland just after WW1 when the Troubles were just beginning. Major Bernard Archer goes to the ill-named and shabby Majestic Hotel (a symbol of the declining British Empire) to sort out an intemperate engagement but ends up falling in love with…