Here is a photograph from about 1956 or thereabouts. There are only a few local telephones and so Crimson Tours are St Ives 45. This is taken right opposite the slipway just beside what was Hart’s ice-cream parlour and Doble’s Wall. The ladies are clearly waiting to go out on a trip in a charabanc -no longer just a “carriage with wooden benches” but a small motor coach. They are probably a chapel group heading off maybe as far away as Truro. Everyone is clearly looking forward to the prospect including the gentleman side on to the camera. Television is evolving as a flickering bluish device to be seen on small screens in Hollow’s window and too expensive for most people. The coach will actually come down to downalong which is a thriving community about to excercise some folk with the challenge of providing “Bed and Breakfast.

A year or two later day-dreaming on Smeaton’s Pier I was rather suddenly surprised by the arrival from the Bay of troops, probably Marines in DUCKS http://en.wikipedia.org/wiki/DUKW .

These were approaching the harbour and as the first vessel rounded the end of the pier I managed to get a closer photograph. Just what they were actually doing, I never discovered. 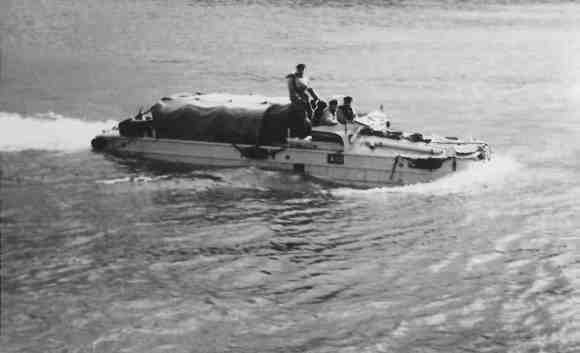 Commandos, however, were often to be seen in the district-they trained at Commando Ridge on the North Coast near St Just-  where they trained during the War. The next time that service personnel were in evidence was after the Torrey Canyon Disaster. http://en.wikipedia.org/wiki/SS_Torrey_Canyon.

It is only in the last few years I learned more of the various occupations of the town and incursions into the Bay:- The Parliamentry Army,a Slave Ship, The Duke of Monmouth, The Hessians of to the American War of Indepence. Indeed, records from the St Ives Archive Centre furnish an encampment on the Island after a military parade. It was actually a recruiting rally for the DCLI, and they must have gone around the county. It was called Flag Day and took place on Whit Monday, 1899. The photograph is of the 2nd Battalion. Further information available from http://www.stivesarchive.co.uk/