Roth is a great writer and strongly recommend -Summer Before the Dark: Stefan Zweig and Joseph Roth, Ostend 1936 by Volker Weidermann too! 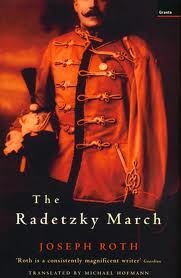 The Radetzky March is listed in 1001 Books so I pounced when I saw it at the library!

This is why the editors included it:

The Radetzky March ranks as one of the finest European historical novels of the twentieth century and is the outstanding literary work produced by the prolific journalist and novelist Joseph Roth.

Through three generations of the Trotta family, the story traces the decline of the Hapsburg Empire in its dying days, but this is not a family saga.  From the hero of the battle of Solferino who saves the Emperor Franz Joseph’s life and is subsequently ennobled from plain Lieutenant Trotta to Baron von Trotta and Sipolje; to his son Herr Van Trotta who becomes the District Commissioner; to his grandson Carl-Joseph who has an indifferent peacetime career in the army, the book focusses just on these three men who are all, effectively, bachelors, and how they…