The Spanish language started attracting widespread attention in Britain in the 19th century, when “Great Britain’s attitude to Spain was softening, and former prejudices were giving way to a new understanding” (The emergence and growth of Hispanic studies in British and Irish universities, 2018.11.705). 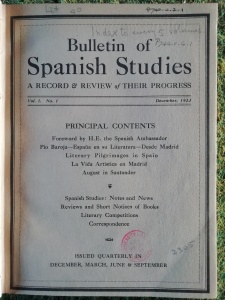 Modern languages were officially introduced in the 19th century in universities such as King’s College London and University College London, and later, in the so-called redbrick universities (Birmingham, Liverpool, Leeds, Manchester, Sheffield and Bristol) – the term “redbrick” was coined by an influential English Hispanist, Edgar Allison Peers, Professor at Liverpool and founder of the Bulletin of Spanish studies (1923). These newer universities were more open to the study of modern languages than the historic universities, such as Oxford and Cambridge.