I was trying to get into Eva Ibbotson’s “The Dragonfly Pool”. It is actually quite good and suitable for regression. Maybe because the current situation seems to require hyper-vigilance or some other reason, I am reading it somewhat slowly. I know she has written interestingly about Vienna but this is set in Dartington in the pre-war era. The school is not called Dartington- but Delderton Hall in the book is clearly there. Incidentally this reminds me of an Edward Crispin crime novel about a cathedral which was set in the same area but a slightly later era. 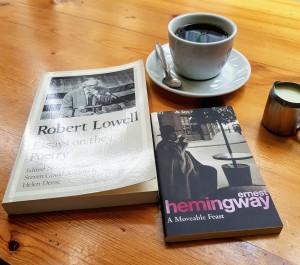 Robert Lowell has much been in the news currently- I believe his letters were recently reviewed in the LRB or perhaps the TLS. The poem of his that I liked most was “Sailing Home from Rapallo” –

The crazy yellow and azure sea-sleds
blasting like jack-hammers across
the spumante-bubbling wake of our liner,
recalled the clashing colors of my Ford.
Tom Pauling has an interesting appreciation of this poem in his book “The Secret Life of Poems” In any case this poem and a distant memory of his most famous poem “The Quaker Graveyard in Nantucket” https://www.poetryfoundation.org/poems/48984/the-quaker-graveyard-in-nantucket
In any case my reading about his friendship with John Berryman was enough to tempt me to part with £2-99 for the collection of essays about Lowell from the charity shop. Thumbing through this volume in a nearby coffee shop I discovered an essay explaining how Lowell and Berryman were in a tradition stretching back to Baudelaire- poète maudit. Outsiders responding to the new criticism of a special few like Allen Tate and Randall Jarrel. They were living in the era of the Cold War and also living life at an extreme pace, devoted to literature and studying its classical roots.
The Hemingway begins with a kind of prose poem to a particularly downtrodden and louche venue seen through the approach of autumnal mists- the Cafe des Amateurs. It no longer exists. It develops into a surreal story which Hemingway sounds lyrical and slightly sozzled!