Dr Mee’s quest begins with raw data used by Thales of Miletus to make an accurate prediction of a solar eclipse as early as 585 B.C. recorded in an the account of a battle by Herodotus. Thales analysed the highly accurate data provided by the skilled observations of the Babylonians. Early theories of the heavens are explored in detail with puzzles provided to encourage the reader, for example, to grasp the importance of Galileo’s experiments, Kepler’s revolutionary theories and the towering work of Newton. Midway through this engaging account Dante and the State of Denmark have all been touched upon. This book is a determined attempt to counter the ignorance of the public about basic science, famously propounded by C.P.Snow, and to introduce them to the latest theories about black holes, string theory and to covey the beautiful links between gravity and the theory of small particles, like leptons, with the grand structure of galaxies.

It is Nicholas Mee’s ability to combine incidental personal detail with grand underlying theories of gravitation that makes his study entertaining. Had you heard about Samuel Foster? He was Gresham Professor of Astronomy and fellow of Emmanuel College in 1632 and the author of treatises on quadrants and sundials. More importantly, he encouraged the observational skills of Jerimiah Horrocks who first attended the College, coming from a Toxteth family of watchmakers. Mee shows us how one generation can inspire another.

The young Horrocks, generally little recognised, goes on to use Kepler’s tables whose accuracy he recognises to emphasise the importance of the Sun’s gravity. He explains the effects of the gravitational pull between Jupiter and Saturn. His theoretical ability enables him to explain the “irregularities” in the Moon’s orbit known as precession. Along with Crabtree he made observations of Venus in transit across the Sun. Mee consistently shows the importance of seemingly small disparities in data. Importantly, he indicates just how scientific knowledge is the product of a particular community and reiterates the importance of high quality scientific education.

The First World War was a very tough time for intellectuals posted into combat. Harold MacMillan consoled himself bravely with Greek Prose. Wittgenstein fighting the allies in the Austro-Hungarian Army and also under extreme conditions made philosophical notes and Schrodinger, an officer in the same Army, the future discoverer of quantum wave mechanics was using his physics to predict the path of projectiles for the Austrian fortress artillery. Schwarzschild who was forty years old and a professor at the prestigious at the ancient University of Gottingen was scrambling through trenches on their Eastern Front, also as an artillery officer, not only under attack by the Russians but also beset with a crippling auto-immune skin disease. However, such were his formidable mathematical skills, that he was able to use Einstein’s recently published formulation of General Relativity (1915), and whilst under extreme stress to use symmetry in a novel way. Using this elegant technique he produced a solution to describe the curvature of space-time in a spherical structure such as a star. Such an approach astounded Einstein and continues to inform theoretical astronomy today. “Gravity”, which is subtitled, “Cracking the Cosmic Code” abounds with anecdotes, such as these, to enliven the basic Physics. He mentions the human tragedy too; a few months later in 1916 Schwarzschild died without his ground-breaking work gaining significant recognition.

It is interesting that in an historical account intended for the common reader, there comes a point where theories and more particularly equations have to be stated rather than proved in full detail. There is something of a quantum leap from A-level to post-doctorate topics. In general, Mee handles this very well by maintaining interest with engaging stories and simple examples. There are essentially two chapters on Einstein’s theories and sadly, rather too small diagrams which do not facilitate the leap in comprehension. In short, you may be able to find two complete books which will cover this particular ground in detail. In other respects Mee does a sound job. He provides internet and other references in valuable end-notes. The book is lavishly illustrated with 14 coloured plates, but more thought might have been given here over the balance of choice. Personally, I could do without the mystical geometrics (the products of his software company?) which sit somewhat uncomfortably with a mural of Dante and medieval instruments. I was not thoroughly aware of Minkowski’s geometrical contribution to Einstein’s theories and this alone makes up for other minor weaknesses.

In the final chapters examining theories of space-time surfaces and the earliest expansion of the Universe, Mee touches on the essential grandeur of recent discoveries. Deep connections underlie the combination of colliding black holes with fundamental concepts like entropy and time’s arrow. The fascinating variety of supernovae is adumbrated. This book is certainly a challenging read but will repay the reader’s efforts to grasp the majesty of the mathematics of gravity; the force that holds our worlds together.

A major and intelligent novelist like Penelope Fitzgerald has happily become the subject of a sensitive and engaging biographer, Hermione Lee. The result is enthralling; a work which is entertaining, informative and profound. In an earlier essay, A Quiet Ghost, Lee mentions interviewing Fitzgerald on the radio in 1997. Two impressions struck the interviewer. First, how her novels always seemed to leave something unsaid. They contained some mysterious, perhaps even transcendental quality to stimulate the reader’s imagination. On the other hand, Fitzgerald thought that the writer ought not to be impartial and indeed should be clear about her own moral position. This viewpoint drew her to write both eloquently and sympathetically, of those who are born to be defeated, the weakness of the strong and the tragedy of…..missed opportunities.

Penelope Fitzgerald came from an earnest and renowned academic family, the Knoxes, which included several prominent clerics; her grandfather was the Bishop of Manchester. A considerable biographer herself, she wrote a book on the Knox brothers, these included two Oxford pastors (one of whom, Ronald Knox, converted to Catholicism, was famous as a biblical translator and whilst chaplain at Trinity College became a mentor to the future prime minister, Harold Macmillan), a top Bletchley cryptographic analyst and Penelope’s own eminent father, ‘Evoe’ who was editor of Punch. Fitzgerald wrote prolifically from childhood and fulfilled some of these high expectations by gaining a brilliant First at Somerville. Graduating in 1938, she was already known for her membership of the smart set, for her student journalism and a reticent, indeed peremptory manner. Women could not actually graduate at Oxford until a statute was passed in 1920. Hence she was amongst Oxford’s early women graduates. Her striking appearance within the smart set earned her the nickname of the blonde bombshell. 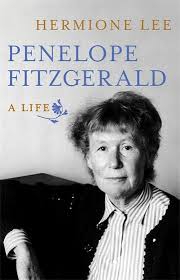 Hermione Lee usefully reminds her readers of other contemporary writers throughout her account; that Iris Murdoch was to arrive at Somerville in 1939. A.S.Byatt is referred to somewhat wryly and the influences of Rose Macaulay and Stevie Smith as friends outlined. This is an unashamedly literary biography and wonderfully so. The importance of the Georgian poets and the Poetry Bookshop in Bloomsbury to Charlotte Mew, whose biography Fitzgerald’s wrote, are entertainingly conveyed. Hermione Lee conveys her subject’s deep capacity for diligent background research and put this across deftly. Her account too shows great depth of feeling for the plight of that generation of women who had to face both the devastation of bombing and the scars of war on men like her husband, Desmond, who had fought bravely in Italy with the Irish Guards. Post traumatic stress was not then fully recognised. Her attempts to cope with his drunkenness and criminality and still look after her three children underline Penelope Fitzgerald’s tenacity and courage.

During the Blitz, Fitzgerald was writing as a recording assistant at the ocean liner of Broadcasting House. The courage shown by the staff, their tasks and relationships, quarrels and difficulties became the material for her novel, Human Voices. This work showed her ear for conversation, propaganda and announcements. Not only was this a war where radio played a historical role in rallying the nation, it broadcast De Gaulle’s speeches to invigorate the Free French. Hermione Lee is magnificently instructive on how the writer’s experiences are turned into a thought-provoking novel.

In the early fifties Desmond Fitzgerald, then an Irish lawyer, became the editor of an influential literary review. However, Penelope provided the drive behind the international World Review. This project was successful in publishing a panoply of significant authors including major figures like Bertrand Russell and Walter de La Mare as well as the about to become successful J.D.Salinger. Not only did this publication crumble in this era of austerity but it seemed to herald the most distressing period of her career. Although, she was associated in two great enlightened projects that many will recall; BBC school broadcasting and writing for Marcus Morris who brought out the Eagle, Girl and Swift. Not the least of the pleasures of perusing this book is the facsimile reproductions, little drawings and evocative photographs.

The difficulties which the Fitzgerald family faced in the early Sixties culminated in the sinking of the houseboat on which they were living in Battersea. This and the consequent homelessness are heart-rending to read. However, the resulting novel, Offshore was to win her the Booker Prize in 1979. Her greatest work is considered to be her short enigmatic historical novel, The Blue Flower (1995). It retells the entrancing love story of the German Romantic poet, Novalis. Hermione Lee’s exposition of this short work is a tour de force in itself. To conclude, this is a marvellous biography that shows how Fitzgerald’s remarkable determination finally gained her recognition in her sixties. Author and subject demonstrate the same exuberant curiosity.