Sounds an important and interesting read. 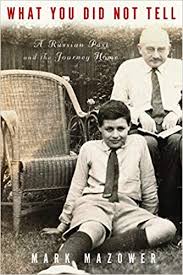 Mark Mazower, What You Did Not Tell:

A Russian Past and the Journey Home (Other Press)

Mark Mazower, the Ira D. Wallach Professor of History at Columbia University, is one of contemporary America’s most eminent historians of modern Europe, the author of several books on Greek and Balkan history, along with others on 20th century Europe generally.  Born in Britain in 1958, Mazower grew up in the Golders Green neighborhood of North London.  His home environment bordered on bland: it was thoroughly stable if unflashy, but most assuredly not a place where his parents dwelled upon the family’s past.  Before writing this affecting family memoir, What You Did Not Tell: A Russian Past and the Journey Home, Mazower probably did not realize the extent to which his family background, at least on his father’s side, was anything but bland.

Mazower’s quest to learn more about his father’s…