Of course, Licoln was quoting the Gospel of Mark 3:25. I find so much of Eco interesting and have read one of his last collections, “Inventing the Enemy”. You are surely correct that much more tolerance is essential to rational discourse, especially where feelings run high over political issues. 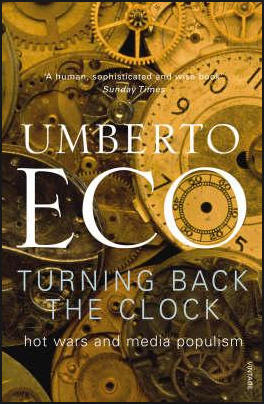 This short essay on terrorism is included in the book Turning Back the Clock: Hot Wars and Media Populism.

Eco begins by asserting the primary goals of terrorist activities.

What is a terrorist act usually intended to accomplish? Since a terrorist organization pursues and insurrectionary utopia, its primary aim is to prevent the establishment of any kind of agreement between the opposition and government … In the second place, terrorism aims to goad the government in power into hysterical repression, which the citizens will then find antidemocratic and unbearably dictatorial, and hence to spark an insurrection among the vast pool of “desperate proletarians or lumpenproletarians” who were only waiting for the last straw.

When I think about how divided the US has become following the 9/11 attacks, I can only sense that the terrorists were successful. A wall is now in…