Breakfast over, islanded by noise,

she watches the machines go fast and slow.

She stands among them as they shake the house.

They move. Their destination is specific.

She has nowhere definite to go:

sideboards light the white of walls.

Cups wink white in their saucers.

The light of day bleaches as it falls

on cups and sideboards. She could use the room

to tap with if she lost her sight.

Machines jigsaw everything she knows.

And she is everywhere among their furor:

the tropic of the dryer tumbling clothes.

The round lunar window of the washer.

The kettle in the toaster is a kingfisher

swooping for trout above the river’s mirror.

The wash done, the kettle boiled, the sheets

The silence is a death. It starts to bury

the room in white spaces. She turns to spread

a cloth on the board and irons sheets

in a room white and quiet as a mortuary.

When I started looking at this poem today I soon discovered that the poet sadly passed away just last month and there is an obituary which may be found at https://www.nytimes.com/2020/04/28/books/eavan-boland-dead.html

This seems to me to be a poem which expresses considerable ambivalence to what at first seem comfortable domestic surroundings. In current circumstances it might seem to have some special appeal. The poet feels herself to be marooned and isolated with domestic noises in the background from perhaps a washing machine or spin-drier. Unlike these machines which may perhaps be seen as having some resemblances to male characteristics she lacks a sense of direction. The element of threat appears in the second verse where the interesting verb “tap” introduces the suggestion of blindness. ‘Tapping’ might be seen as a very quiet noise in contrast with the loud machinery. It carries the possibility of tap dancing too. It also carries meanings of connection.

The tranquil security of something like a Dutch interior becomes still more alien in the third stanza. The jigsaw might well imply cutting up or puzzlement. Although the images of a lunar moonlander and the reflection of a swooping kingfisher are at the same time threatening, bizarre but also carry a strange delight. They seem to suggest the distracted nature of the woman and her longing.

In the final lines a sudden stillness suddenly reigns. All is clean and silent but also overcoming. She at last starts to move but the sheet she irons might almost be a shroud. There seem to be elements of boredom and domestic imprisonment but all recorded with a deceptively light touch. This poem comes from a collection called Night Feed  1982. An Irishwoman and feminist her collection is published by Carcanet Press and very well worth attention. 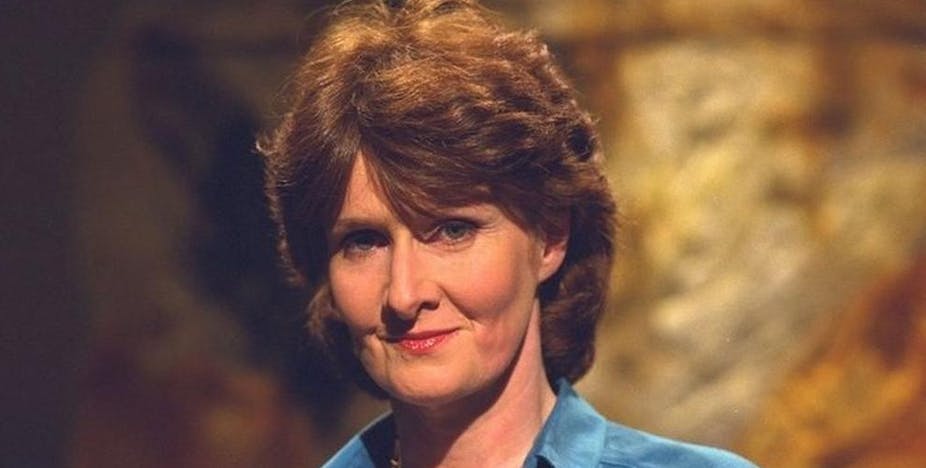