These works were made in the last ten years of John B Anderson’s life. To quote from the notes at the library, “The fine lines adopted from his abstract period remain as precise: less indeed can be more. The work is observational, some of it quite quirky including bad hair days and some serene moments……… John B Anderson pushed his figurative work as far as he could towards abstraction: he then returned to a figurative style with a more restrained and pared back approach resulting in these fine line works.” 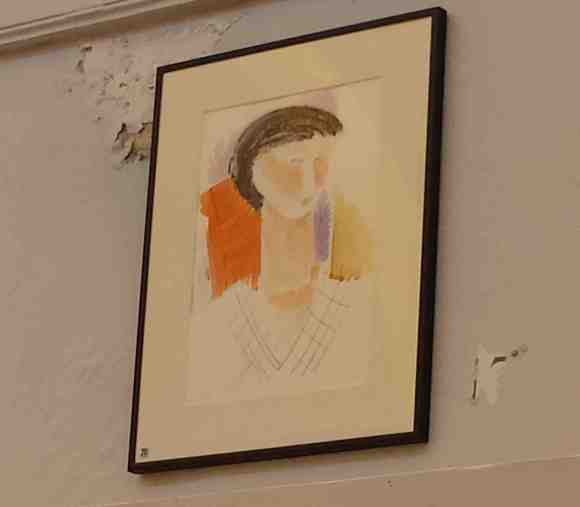 At http://www.thisiscornwall.co.uk/Library-pays-tribute-John-B-Anderson/story-13244578-detail/story.html#axzz2leYQH1no there are further details including the remark that, “An artist who was to die in 1997 when in his early 50s, in recent years his paintings have been seen in various local venues, from Trereife Gallery to Penzance Arts Club, and the sequence of his works about to be shown in Penzance Library reveal his admiration for such as Van Gogh, Modigliani and Picasso, and his search for his own style through the figurative and the abstract.” 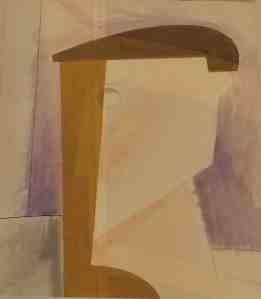 The following images scarcely do these paintings justice taken hurriedly with my mobile. They are hung rather high and difficult to see at their best advantage. However, their geometric style and their delicate colours make them very appealing and remind me in particular of the work of Oskar Schlemmer (4 September 1888 – 13 April 1943) who was a German painter, sculptor, designer and choreographer associated with the Bauhaus school. Some of the images displayed may indicate this similarity as well as with the Bauhaus theatre designer, Lothar Schreyer.