“Hugh Stoneman inspired a renaissance in fine print making in Britain and the artistic scene in Cornwall”, according to Fiona MacCarthy in The Guardian and looking through the splendid 144 pages of this book, you can see just why this is the case. The 99 works illustrated include those of Sandra Blow, John Hoyland, Martin Leman and Sir Terry Frost. Many techniques-from woodcuts to photographs, linocuts to carborundum –silicon carbide grit mixed with acrylic binders- are employed. As well as an introduction, showing photographs at work in the seclusion of his purpose built house in the tree lined valley below Madron, there is a biography and a useful and instructive glossary of print terms.

The works illustrated  now belong to the Art Fund Collective and were on display at the Falmouth Art Gallery. The text indicates,”Hugh’s links withCornwall, were always strong . He was first based at Dod Proctor’s previous studio and later he bought Orchard Flower Farm, Madron in the early 1980s with his second wife Linda, which was to become the family home –Hugh commuting toLondonto his studio inLondonevery week”. Hugh was also deeply involved in an endeavour which is about to reach fruition in St Ives, the renovation of the Porthmeor Studios.

Among the attractive variety of prints in this volume there are several which are of striking interest. There is the darkly mauve, purple and black image from Patrick Heron’s Brushworks Series, an etching made in his last year.  This is printed alongside the contrasting botanical, Spring 1957 by Dame Barbara Hepworth. Among the prints by Breon O’Casey, the vibrant simplicity of Four Circles 2003 stands out as does, for quite different reasons, the unusual vibrant simplicity of Little Girl on a Lion by Andrew Murray. This is an inspiring collection worthy of extended perusal; the fruit of many years of work by this masterful print maker.

Details of the Stoneman Gallery in Chapel Street, Penzance may be found at http://www.stonemanpublications.co.uk/ 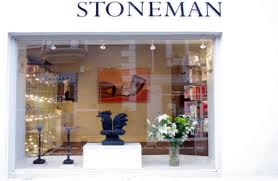