Jonathan Franzen: The Comedy of Rage makes frequent mention of Franzen’s attendance at Swathmore College in Pennsylvania, where he graduated in 1977 and where the author, Philip Weinstein was, until last year Professor of English. An earlier graduate, the novelist James A. Michner left his entire estate of some 10 million dollars to the college and the proceeds from his works, including the one on which South Pacific was founded. It was at Swarthmore that Franzen met his wife, where she had been a gifted classmate. Weinstein, the author who teaches there, has personally known Franzen for over two decades and the latter has given him a personal interview and been otherwise in contact with him for some considerable time. If this all seems just a little blurred in its boundaries, not to say incestuous, then that might not matter. However, Franzen’s work closely concern itself with shame, guilt, incest, rage and humiliation. 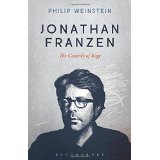 This book strives to relate Franzen’s fraught personal life with his novels and his journalism for the New Yorker. Weinstein has recently published an acclaimed work, Becoming Faulkner which may be loosely termed a psycho-biography connecting that writer’s life with his work. The tone of this work, is reminiscent of the films; Tom and Viv about T.S.Eliot’s disastrous marriage and also Sylvia, about the difficult relationship between Plath and Ted Hughes. Brought up in Webster Groves in St Louis, Franzen appears to have lived in fear of his earnest and ambitious parents. His father was taciturn and averse to expressing feelings. Franzen also had difficulties with his mother, who was engulfing, over-demanding and inappropriately needy of her son. The suicide of a close friend and literary rival, David Foster Wallace was later to add to Franzen’s sense of alienation.

However, it appears that the sensitive Franzen immersed himself in his studies in German, finding his tutor a supportive and friendly figure. However, travelling to Munich and Berlin, the latter on a Fulbright scholarship, he became focussed on two complex writers; Kafka and Kraus. In accordance with Weinstein’s general thesis on his subject’s struggles with father figures, Franzen became fascinated with Kraus and also with the latter’s literary struggles with Heinrich Heine. According to Krauss who was Jewish but later converted, Heine, another cosmopolitan Jew was responsible for downgrading journalism with fancy French inventions like the popular newspaper supplement or Feuilleton. In a characteristic leap, these products of a superficial Viennese scribbling around a hundred years ago are compared, by Franzen, with the dumb-down products of social networking.  Franzen is concerned to re-educate his public with hard reading. His latest novel at 563 pages-shorter than those of say, Robert Musil or Thomas Mann-but scarcely a snip!

Weinstein is most concerned with explaining Franzen’s development as a novelist. His first novel, The Twenty-Seventh City concerned itself with the decline and corruption in his home city, St Louis and his next novel about earthquakes in north-eastern Massachusetts. It appears that Franzen held somewhat overblown expectations that were perhaps based on an unmoderated and explosive rage now exacerbated by a failed marriage. Interestingly and simultaneously, another of his self-stylisations was as a kind of Charlie Schultz figure. His writing appears to have undergone a change upon the death of his father, his distressing relationship and also as his recognition that his own inappropriate literary role models, particularly Thomas Pynchon were unsuited to what he discovered he was best at writing. It also might be true to say, although Weinstein does not appear to explicitly say it, Franzen was publicly analysing his writing, almost as John Clare put it in lines-also taken by T.S.Eliot, “the self-consumer of my woes”. In any event, with the use of humour sometimes manic, Franzen was able to focus more productively on the anger within the family, generated from the past, and to enrich his narrative. There then follows an increased concern to involve the reader, to keep him interested and to keep him reading. 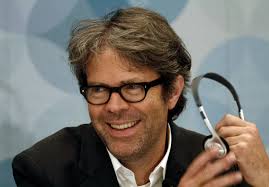 In his next book, The Corrections, Franzen dealt with the impact on his family of Alfred’s irreversible dementia. Alfred is essentially a personification of Franzen’s father. The book’s title is therefore ironic. However, Weinstein insists, that in this and later books greater recognition is given to his character’s identities and to allow them some freedom to develop. Weinstein goes on to discuss Franzen’s recently published book, Purity. Reviews of this book which praise both its entertainment value and its seriousness. They also mention that it makes allusions to Great Expectations. It also concerns itself with the Occupy Movement, state secrets and whistle-blowing.

Reading this book, I found myself wondering who might find it useful. Possibly students of American literature. However, the writing lacks clarity in places and sometimes sentences are so gnomic as to lack any sense. The account is repetitious and somewhat forlorn. Much reference has been made to Freud but little to the insights of his followers. I am sorry to say that I am unsure that Franzen’s popularity will benefit greatly from Weinstein’s book. Nonetheless, this is a brave attempt to address the work of a writer of considerable contemporary relevance.

For those who are interested in the Kraus Project and Vienna (again!) will enjoy the discussion at https://www.youtube.com/watch?v=O5SPtKK2NPk

This Newsnight interview is also worth viewing; amongst other issues he discusses his latest novel https://www.youtube.com/watch?v=nGIrNN0k7iU