Coast with it’s trees, hedges and seasonal variations as a starting point. Her website may be found at http://www.kerryharding.co.uk/. Kerry was very interesting on the topic of the famous Dresden artist, Gerhard Richter https://www.gerhard-richter.com/en/ mentioning his process, his photographic work and his continuous experimentation using a wide variety of methods and sometimes controversial subject matter. She also mentioned his ability to work on different projects simultaneously. She worked very hard to create a welcoming atmosphere in her space- as she says on Twitter, “studio almost ready, tinsel and fairy lights then its done.” A lovely 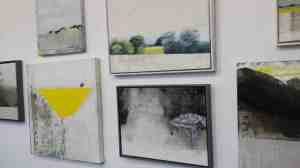 range of paintings that I found so interesting that I 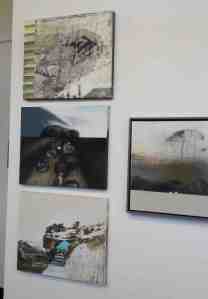 came back to browse them for a second time. It was also informative to hear how some canvases were composed of many underpaintings-up to ten or more layers.

Kathryn Stevens, http://kathrynstevens.co.uk/, clearly rejoices in the freedom of working on a large scale. The billowing colours of her canvases express the joy of painting in bright colours. Some of them have a feathery and eloquent quality that puts one in mind of Georgia

O’Keeffe (or perhaps Otto Gottlieb) but here we have an abstract expressionism with an upbeat and optimistic feel. She told me how she works freely, sometimes with music and chatted with the same exuberance that her work conveys. I was particularly taken by a study in

crimson, scarlet and white. She hails from St Ives and her paintings exhibit the wondrous light for which the town has become famous.

In short there was much to add cheer on a cold Sunday. It was good to see the Siobhan Purdy’s work again- which adorns the wall opposite as I write, the Mexican and Maya themed prints in the Apex space and to talk again with Naomi Singer whose glass works continue to thrive. Interesting too were the textile pieces by Zoe Wright.

Before returning to the Melting Pot once again, I went into see the illustration work of Esther Connon and was much taken by her story of The White Butterfly which can be seen on http://www.estherconnon.co.uk/stories.html?s=5. I wondered if it would be possible to animate some of this according to the methods of http://thepapercinema.com/  and this fascinating method may be seen both on videos on the papercinema site and on the community project in St Ives filmed earlier this year by my friend Alban. Altogether with the new building project at Krowji already under-way, great developments can be expected from this artistic phoenix rising from the ashes of the Grammar School at Redruth. 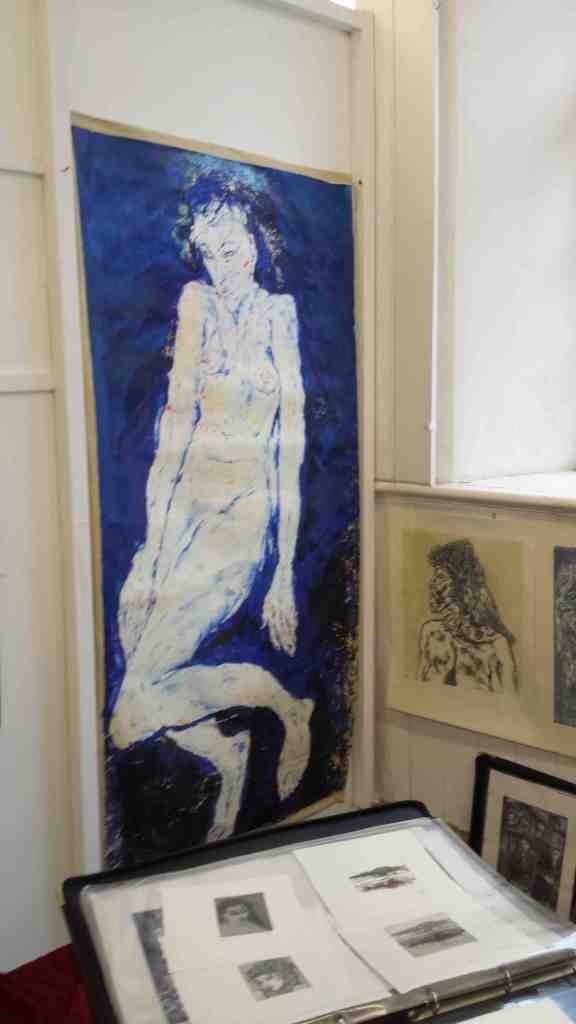 Getting to Krowji on a Sunday in December by public transport is a time-consuming business. Servicing the railway and circuitous bus routes turn a simple trip into an epic voyage. At least it affords time to see more new supermarkets, innovative centres in Pool and glimpses of neo-classical architecture in the grand manner. The upper stories of the façades remind one of the prosperity of this area in its heyday.

Upon arrival, the bohemian atmosphere in The Melting Pot Cafe, the warmth and the leek and potato soup help to revive after the lengthy journey. The wall of clocks and masques and surreal paraphernalia suggest that a cabaret is about to begin and indeed there is a pianist in cap and bells already upon the stage. This has a timeless and dreamy ambience quite unique and sui generis.

Moving around the crowded studios, there was a buzz which always seems stronger here where the art is being produced than visiting a gallery. I was particularly attracted to the work of Linda Crane -printmaking and painting but also small sculptures -including a small head which I thought reminiscent of Giacometti. The angular and elongated forms, the expressionist use of paint and the dramatic drawings were intriguing and attractive. My impression too was as though I felt a resonance both with Kokoschka and El Greco. Her work may be seen at http://www.sulisfineart.com/search/page/2?q=Linda+Crane and also at http://www.outsidein.org.uk/linda-crane where I was surprised to read of her work being in Penzance at the Redwing Gallery.

I think the fact that her atelier was empty increased my fascination with her display and her portfolio.I think my recent travels may also have influenced my susceptibilities. It is also interesting to research the influence of El Greco on Expressionism- as in the recent exhibition El Greco und die Moderne.(Dusseldorf 2012 http://www.smkp.de/en/exhibitions/archive/2012/el-greco.html)